I’ve finally managed to get to the allotment when there was nobody else around and record a video there, and tag a visit to the potting shed on the end.

Although the allotment is technically a public place and there’s no reason why I shouldn’t film there, I feel that in some ways I’m invading the privacy of the other plot holders by catching them in a video, even though they probably won’t know or ever see it.

Anyway here’s an update from the plot and potting shed, I hope you enjoy.

As mentioned last week I spent Bank Holiday Monday on my allotment – digging. This weekend I made good on the areas I’d dug by planting out a range of things – cucumbers, pumpkins, courgettes, gherkins, butternut squash & patti-pan squash. The plot is now looking quite full, although as we continue to harvest various things, notably at the moment the broad beans there’ll be some space opening up in due course. Those broad beans have been spectacular too, I don’t think I recall a year when we’ve had such a bumper crop.

We had a nice picnic lunch one day last week, just some basic provisions and a quiet spot in the woods. I think it’s something we should / could do more often, but it is sometime easier just to have a sandwich and a sit down.

My Mum’s health isn’t so great at the moment, and that’s taking up a lot of time. I guess old age comes to us all, and that sooner or later we’ll all need some support of one kind or another.

I’ve been reading “My Midsummer Morning” by Alistair Humphreys this week. It’s the authors story of retracing the journey of Laurie Lee across Spain, busking for money with a violin. Whilst the two covers bear a striking similarity, the main difference I can see so far is that Laurie Lee could play the violin whereas Alistair Humphreys is a beginner. I’m enjoying it though, well written and very much about the author’s experience of his adventure rather than his predecessor.

That’s it for this week, catch you again soon. 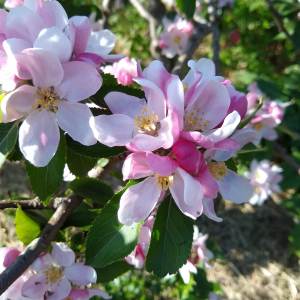 It’s Bank Holiday Monday as I write this, and I’m a little bit later than usual sitting down to think about what’s happened in the last week. Essentially a short working week for most with the long weekend around Easter and quiet for me as I am waiting for my client to respond regarding a report. He has responded and is taking a wider view across his organisation before giving formal comments.

It’s been getting progressively warmer all week with the weekend turning into quite a scorcher and I’ve been doing quite a bit allotment and garden wise, while I’ve had the time. I’ve sown some lettuce seed as individual plugs – some for my Mum’s garden and the remainder as back-ups for the allotment. I’ve potted on some tomatoes and have got some more seed to sow a few more plants.

I’ve also started off my runner beans. Garden lore says that you should sow your runner bean seeds on the first Bank Holiday in May and plant them out on the second one, so these are a little early but that might not be a bad thing as they were covered in a little mould which I washed off and they seem to be okay – not soft or any obvious other damage other than the mould – so if they don’t grow I’ll have time to get some more.

My car was MOT’d and serviced at the beginning of the week. It passed and so there’s nothing further to do until next year or unless there’s a problem.

Wilson was also back at the vets for his next round of tests – we’re awaiting the results.

I’ve been reading “The Way Home – Tales from a Life Without Technology” by Mark Boyle, essentially the stories of the author when he completely gave up technology, including electricity and other mains utilities, living on an island near Ireland. I’m not that far in, but I’m enjoying it so far.

Slightly ironically I’m reading it on my Kindle.

I’ve also  got  the  (re)review  of “Under  The  Rock” coming  up next weekend with the chance to receive a copy of the paperback.

Been watching the new season of Bosch on Amazon over the weekend, it’s another great season of the show, and it’s great that such high quality tv can be be made to this standard – thoroughly recommended! If you’ve read Michael Connelly’s “Two Kinds of Truth”, it’s mostly based on that.

It’s that time of the year when baking and making turns to Christmas.

I doubled up the ingredients in the video, but here they are to make a approximate 2.5 pint pudding:

The tomatoes in the potting shed are starting to ripen, it’s only been 7 1/2 weeks since they were planted out and they’re good to be eaten.

It’s been a while, but here are a couple of video updates (one from the allotment and one from the potting shed).