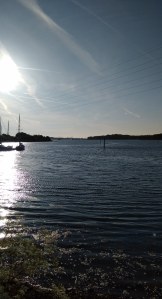 This week feels like it’s been full of lots of good things, it’s been fairly busy but in a good way, and yet I’ve had time to spend on some of the things that I love.

It’s also been blessed by being mostly warm and dry for the better part of the week, with a little rain at the weekend to help the garden and the allotment along. I can’t complain.

It’s been a week of books this week. It started on Monday went I had to go into town to run a few errands and I popped into the library to look for a book that my other half wanted to read. They didn’t have it, but by chance I was looking to see if they had any Maigret books on their shelves – I always look, but am usually disappointed – and they had two. I’ve mentioned it before but Maigret has become a bit of a thing for me, and these two (Maigret, Lognon & the Gangsters and Maigret & the Reluctant Witnesses) didn’t take long for me to read. I had a reasonably long journey on Thursday and finished the second one on the train. I’ll take them back this week and see what else they have.

I also received a surprise from E&T Books – “The Seafarers” by Stephen Rutt. I’ve reviewed a few books for E&T and this one came in the post and I am about halfway through. I’ll post a separate review when I’ve finished it. Finally Nigel Slater’s latest cookbook “Greenfeast” came. This is actually a two part set, and this volume covers Spring and Summer. Autumn and Winter is out later this year. It’s a lovely book, although I haven’t had a chance to indulge properly yet!

On Tuesday morning I was walking the dogs along the creek when we chanced upon a Hedgehog. Haven’t seen one in a while, and a little surprising that it was out so late (they’re mostly nocturnal). Normally this isn’t a good sign, as it means they are staying out to find food, but this one seemed to healthy enough and was of a good size so I left it be.

The Marshes of America’s Space Programme

The Day I Tried To Love Ticks

The Bitter Truth About Starbucks Coffee

The Poetry of Painting: how to paint loss and life

Had a bit of a bread adventure at the weekend too. If you’ve been reading here for a while, you’ll know that I’ve been experimenting with sourdough bread for a while. Well last week we had a bit a of a lack lustre starter mix, that although it turn out a nice loaf, it didn’t really seem to rise all that much. Anyway, as is my habit, the leftover starter went into the fridge in a Kilner jar for the next time. On Saturday morning I noticed that the starter in the jar was rising at quite a fast rate (normally there is very little or no rise when it’s in the fridge). When I checked on it a little bit later in the day it had risen even more, and was into the lid of the Kilner jar.

I thought that I should take it out of the fridge and release some of the pressure from the jar, which I did and the jar open with a loud pop, and the starter started to ooze over the edge of the jar.

I decided to use some of this to make another loaf, so I measured up my ingredients and put the remaining starter back into the fridge (where it has been behaving itself since). I must have made a mistake with the measurements however, as the resulting dough was very wet. Too wet to do anything much with, so I had to add extra flour, which I did and kneaded in, and then put to one side for a final rise.

It worked out okay in the end, even though I’m still not sure how this happened I got a good loaf out of it.