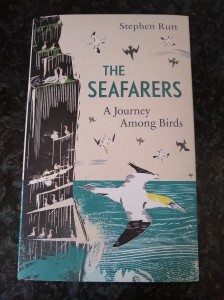 Last week I was sent a copy of Stephen Rutt’s first book – “The Seafarers – A Journey Among Birds”, by the publishers, Elliott & Thompson.

It was an unexpected surprise and “The Seafarers” is one of those great joys of a book that is part autobiographical of the author, biographical of the birds he writes about and full of information and detail of those birds. Be they the charismatic Puffin or the extinct Great Auk the author writes a treatise on each and every bird he sees on his journey, and their homes and habitats.

Stephen Rutt has written a lyrical and delightful story, it is a book written from the heart and takes the reader to the homes of the birds where the author has been as part of his career and where he has escaped to, away from a more hectic life. He writes delightfully about each of the species he encounters, some that will be very familiar to the reader, but possibly many that won’t be and in each case he writes so that we all become familiar with each one. He makes the facts and details of those species accessible to the reader in such a way that it is easy to loose oneself in the story and picture each bird for it’s own character.

The book is also full of references and sources so that the reader can also look further for those species that capture their imagination or want to know more about – I found myself tapping in urls to look at other details of species. I know that I’ll be returning to this great book to reread the sections on those species that are close to my heart, but also as a point of wider reference to other species.

I look forward to reading the next book from this author, although I acknowledge that he has set his own bar very high.

In 2015 Stephen Rutt escaped his hectic, anxiety-inducing life in London to spend seven months at the bird observatory on North Ronadlsay, the most northerly island in the Orkney archipelago. His time there among the seabirds changed him.

The Seafarers is published on 23rd May 2019 by Elliott & Thompson.

Stephen Rutt is a writer, birder and naturalist. He studied on the literature and environment MA at Esses University and has written for Earthlines Magazine, Zoomorphic, The Harrier, Surfbirds and BirdGuides amongst others. As a teenager, he interned with Birdguides.co.uk and in 2015 he spent seven months at the bird observatory in North Ronaldsay. Stephen lives in Dumfries and The Seafarers is his first book.