It’s been a few weeks since I managed to do an allotment video, and now there might just be two in one week. The plot is picking up as the warmer weather arrives, so I’ve been sowing a few seeds and thinking about my plans for the year ahead.

A short video from the allotment.

Here’s the allotment video update that was filmed yesterday before receiving the news about my Grandma. Anyway here it is.

A short update on what’s happening on the allotment, plus talking through some plans for the winter months.

Things are slowing down a little on the allotment now, courgettes that were producing one fruit a day, are now producing about one a week. Other summer crops are coming to the end of their season. It’s now however the end of work on the allotment – I’m already thinking about next year – the planting of over-wintering crops like onions and garlic is just starting as well as broad beans. I’m a little later than I was last year with my broad beans, and they haven’t gone in yet, but the onions and garlic went in last weekend. Here’s a quick video:

The allotment feels like it’s reached that point in the year where there is going to be a regular supply of veg coming from it. I walked around this morning, and was surprised to see just how much things have grown in just a couple of days. Leeks that were just looking like blades of grass a day or so ago are now looking more like stout reeds, and the runner beans have now all germinated (or at least there is one plant beneath each cane). I decided that I was going to plant out my pumpkins and the remaining cucumbers, as well as some courgettes. They need to go out, they’ve exhausted the compost that they were sown in, and are big plants, but the leaves are yellowing, so they need more nutrients. I gave them a liquid feed last night, but the weather forecast for the next week or so, is for double figure nighttime temperatures, so I’m going to risk it. I’ve kept some of the courgettes back just in case, and the pumpkins have gone in relatively sheltered spots, so I think they’ll be okay. 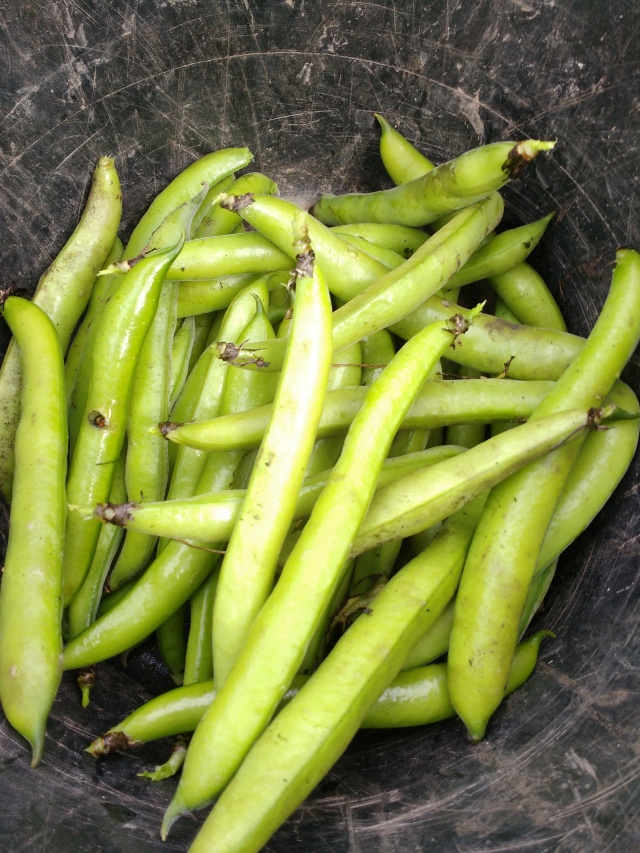 I’ve also harvested the first broad beans of this year. There were absolutely loads of pods, and I’ve picked enough for a meal tonight, and I’ll get some more later in the week. These are the ones that were sown last autumn, and I didn’t think were going to amount to much, but oh how they’ve proved me wrong! There are lots of pods, and the ones sown a few weeks ago to fill some of the gaps are coming along too. Hopefully they’ll be well spread out, but if I get a glut, then I’ll freeze as many as I can.

As I’d planted so many plants I also got the hose out of storage and laid it out. I used it to water the plants that I’d put in, and gave the rest of the plot a good watering. It will stay out now until the winter. I’m always a little worried that it is something that could easily be stolen, but in the eight years that I’ve had the plot it’s been left alone, and hopefully will be again this year.

With everything looking so good at the moment, I’m really enjoying my growing year again this year. Sure it’s hard work, but I love being able to feed myself and my family.

If you’re in the UK and have a long weekend this weekend or are off for the half-term school holiday next week, why not get out in your own garden and sow some seeds?

A couple of videos from last week on the Allotment.