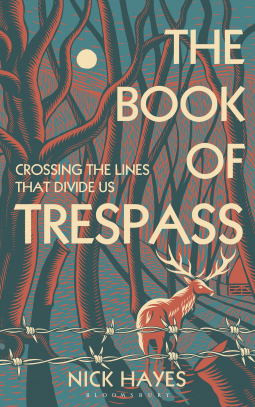 The Book of Trespass: Crossing the Line That Divide Us by Nick Hayes

We’ve probably all done it, whether our transgression has been inadvertent or deliberate but we’ve all been somewhere we shouldn’t have actually been I’d wager.

In the Book of Trespass, Nick Hayes sets out to document some of his adventures trespassing and the laws that surround this “crime”, whether it be from The Vagrancy Act, The Enclosures Act or the building of Walls such as the Great Wall of China, The Mexico Border Wall or even the non-existent wall between North & South Korea, the author covers this in detail. This is however taken at a level that everyone can understand. The law is ultimately complex but this book doesn’t descend into too much legalise or become a textbook on the act of trespassing, although it does way heavy on the page count at times.

Each chapter takes on the name of an animal (fox, dog, cockroach, hare – to name a few) and each chapter tackles a different aspect of trespass, linked to that animal. Beit from the Great Trespass on Kinder Scout, through to protest camps such as the Greenham Common and Heathrow Airport camps or “The Jungle” refugee camp in Calais, all are covered alongside the direct experiences of the author.

The book covers the heroes – such as Roger Deakin and the villains – such as Nicholas Van Hogstraten, when it comes to trespass or preventing legitimate access and many of these I was already familiar with.

It is however the authors own personal experiences that stood out for me in this book. It would have been easy to write a summary of trespass across the ages, but he has actually been out an experienced it first hand, and it is these first hand experiences that bring the book together and make it work so well. These tales settle amongst those tales of history and the relevant laws and rules and pull the book together to make it a fascinating read.

Does the author fall foul of those laws he sets out to break? Well I’m not telling, you’ll have to read the book yourself to find out, but the adventure and history are worth the read alone.

The Book of Trespass is published by Bloomsbury and will be available online and in all good bookshops from 20th August 2020.

What the Publisher Says:

A meditation on the fraught and complex relationship between land, politics and power, this is England through the eyes of a trespasser.

The vast majority of our country is entirely unknown to us because we are banned from setting foot on it. By law of trespass, we are excluded from 92 per cent of the land and 97 per cent of its waterways, blocked by walls whose legitimacy is rarely questioned. But behind them lies a story of enclosure, exploitation and dispossession of public rights whose effects last to this day.

The Book of Trespass takes us on a journey over the walls of England, into the thousands of square miles of rivers, woodland, lakes and meadows that are blocked from public access. By trespassing the land of the media magnates, Lords, politicians and private corporations that own England, Nick Hayes argues that the root of social inequality is the uneven distribution of land.

Weaving together the stories of poachers, vagabonds, gypsies, witches, hippies, ravers, ramblers, migrants and protestors, and charting acts of civil disobedience that challenge orthodox power at its heart, The Book of Trespass will transform the way you see England.

Disclaimer: The publisher provided me with a free copy of this book via NetGalley in return for an honest review. No other payment has been received.

One thought on “Book Review: The Book of Trespass by Nick Hayes”