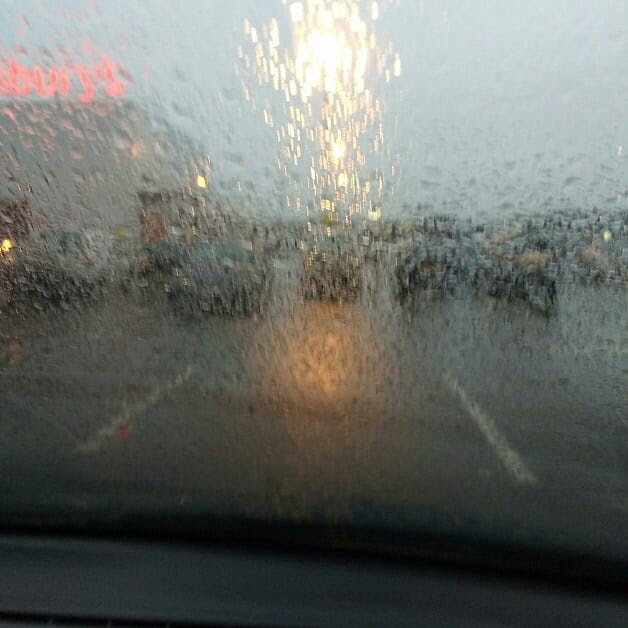 Feeling better this week but not 100%, so I’ve been easing back gently. This virus has really knocked me for six, but I think I’m over the worst of it, although not pushing too hard.

Although it’s been a quiet week, I’ve been doing a couple of things for my Mum. I still have some odd jobs to do for her, but the weather hasn’t been co-operating so they’re waiting for drier  days.

We’ve had a couple of pretty stormy days and it seems that my coat barely has a chance to dry out from my morning dog walk to the one in the afternoon. They’re not really fans of the bad weather either, but I’ve never known them say know.

Work – Been a bit busier this week, although mostly this has been preparing for meetings that I have in this coming week.

Allotment – Total wash out with the weather  this week. I’ve been down a couple of times to check that nothing’s blown away in the strong winds we’ve had this week, and to harvest veg for dinner but that’s about it.

Currently Reading – My reading has slowed down again, as I’ve been a bit more active again this week. I have however read Dispatches from Pluto: Lost and Found in the Mississippi Delta by Richard Grant [GoodReads] over the course of the  week and thoroughly enjoyed it. Not sure what will be up next as yet.

The Week In Wildlife In Pictures – [LINK]

It would seem however that the UK government, within only a few weeks of promising to reduce plastic pollution as part of it’s 25 Year Environment Plan, is about to take a different course, and oppose new recycling targets [LINK]. Now of course these are EU targets and I can already hear all the Brexiteers saying that this is exactly what we should be doing – charting our own course, being masters of our own destiny etc. etc. – but seriously our recycling is already inadequate. The ability to recycle varies depending on where you live, particularly with kerbside collections, but the proposals for 65% of urban waste recycled by 2035 is achievable, but it requires better infrastructure, markets for materials and many things to make it a reality, and obviously this is more than just plastic recycling, but it feels that if the government is simply going to say it can’t support this, it  won’t actually be meaningful target set. It’s not going to wash saying that we’ll set a tougher target – if you were going to do that why don’t you sign up and exceed the EU proposal, that is after all something that you could boast about.

Is This The End Of Civilisation? We Could Take A Different Path – Interesting commentary by George Monbiot [LINK] and I look forward to reading what his proposals are. I am struck by just how selfish we have become as a race, and how governments across the globe seemingly driven by capitalism are continuing to take us down this route, rather than showing true leadership.

I enjoyed reading this  Twitter stream about Tokyo by @craigmod.

So YouTube have written to all of their “creators” – of which I am one – telling them that if they don’t reach new criteria for monetisation then the ability to monetise their videos will be removed [LINK]. I note that they don’t actually say that there won’t still be ads placed before or during their videos, just that they won’t be able to make any money from them. Now I do monetise most of my videos already, but I don’t receive any income from them because I don’t currently meet the criteria either (min. 500 subscribers). The new criteria (min. 1000 subscribers and 4000 watch hours/year), I won’t meet on subscribers numbers obviously but I do get the minimum watch hours (by quite some margin).

On the face of it, this makes little difference to me (unless I can magically find c.700 more subscribers before the cut off date of 20th February), but what annoys me is this is (allegedly) in response to some fairly high profile failings of YouTube in managing the creators who are making an income from less than savoury videos i.e. ones that don’t meet their eligibility criteria for monetisation. Some of these are creators who have massive followings and are able to make a living from their videos. These new criteria won’t actually affect them one bit.

So instead of properly enforcing their existing criteria YouTube are simply doing something for the sake of doing something and not actually tackling the problem. They claim that they have consulted creators like me in arriving at this decision, and whilst I can only say that I haven’t personally been contacted, if I had been I certainly wouldn’t have agreed to this sort of proposal. It would be a little bit like turkeys voting for Christmas.

Anyway as it won’t make any difference to me, I’ll still be making the occasional allotment video, which I will no longer be able to monetise, but as I’ve said above I suspect there will still be adverts placed on it. If there are then I will be moving to a different platform. The alternative is to try and reach 1000 subscribers by Feb 20th. If you fancy subscribing to me channel you can find it here.

This Stephen King Book List [LINK] is an interesting take. On such a large body of work it must be really difficult just to pick one or even a small selection. I’d add Firestarter and IT – I wonder if the latter wasn’t included simply because of the recent film release, but it is one I vividly remember reading long before it was a TV movie let alone a blockbuster.

I’m pleased to see Skeleton Crew on there though, my favourite collection of his short stories. There’s also a couple that I haven’t read (Revival and The Long Walk), so I might have to keep an eye out for those.

That’s the lot for now. If you’ve enjoyed this post please consider giving it a share on social media via one of the links below.

Similarly you can subscribe to all new posts by using the  link in the right-hand toolbar (and unsubscribe at any time by clicking the link in each email).

Have a good week and I’ll be back soon.