I’m a little late posting this because of, well home baking and online shopping basically. My days are a little less structured, which can make for doing things at interesting times.

This past week has been a little bit of a repeat of the one before. In a bizarre lockdown twist I can’t get my car fixed because although the garages are open, the parts stores (or at least the one that supplies the parts for my car) are not. The mechanic was quite frustrated because a lot of his customers are in the same boat (car). Whilst there is a lot of logic to the lockdown there are some illogical twists in terms of what / who is considered essential and what / who isn’t. Anyway it’s on their list to do as soon as circumstances allow. I can still drive it but only on short journeys with a large bottle of water in the boot just in case. I’m obviously not using it much so the impact is minimal for now. Please keep your fingers crossed for me or be like that little Dutch boy and use your finger to plug a virtual hole.

I’ve had quite a bit of work to do this week as one of my clients’ projects suddenly became live again. It’s good for me and has occupied a good proportion of my week and looks as though I will actually have a bill to send out at the end of the month. I’ve also been trying to do my tax return, but having problems with my National Insurance contributions. One part of the system says it’s one figure (which I agree with) and the other part says that it a significantly lesser amount that is clearly wrong. Phoning the helpline didn’t help (no surprise there), so I am awaiting a virtual solution. It’s likely to be a long wait given that most of the relevant staff are busy processing claims for Universal Credit and other schemes as a result of the lockdown. It’s not a major problem, and I at least know how much tax I owe, even if the government can’t add it up right. 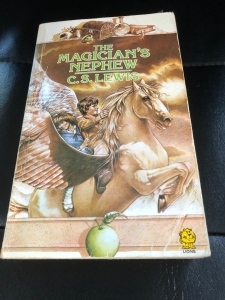 My unexpected work meant that I haven’t had as much time for reading this week, but I did read CS Lewis’s The Magician’s Nephew. I thought that I would reread the Narnia stories and decided to start at the beginning (if not the publication order). I think I was probably about 8 or 9 years old when I last read these books and back then I started with LW&W like most everybody else. I also started reading The Bloodline Feud by Charles Stross, which is the first to books in the Merchant Princes series (and prequels to Empire Games and Dark State, which I’ve mentioned here before). I’ve had the book on my kindle for a while so it’s hopefully another step in reducing the pile of books to be read.

We’ve been catching up on Marvel films this week, or rather Mrs Tonto has been watching the ones she missed in the cinema and I’ve been enjoying rewatching. Captain Marvel and  Avengers: End Game have been our choices, as well as watching some classic comedy; Hi-De-Hi (which doesn’t stand up very well).

A bit more digging and seed sowing (purple sprouting broccoli & parsnips) on the allotment, but otherwise my time there has been limited both by work and the lockdown. Where everyone else seems to be really getting on with their plots mine feels a little slower this year. But that might just be a false impression, although I do need to get some more seeds sown in the week ahead if I can.

Another short one this week, I’d like to say that I’m up to some exciting things this week, and who knows maybe I will be but it does seem a little bit unlikely. Anyway, I hope that you stay safe and well in the week ahead.