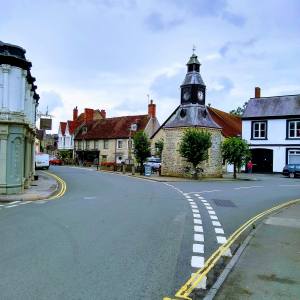 This time last week I was on my way to Somerset to see a potential client, who I’m pleased to say look they will become one. I can’t say much more than that at the moment.

On the way back I made a stop in a little village where we used to go for family holidays when I was a child. It’s actually quite a convenient spot to stop anyway and I’ve done so a few times over the years. The village used to have a secondhand bookshop, sadly now gone, but other than that the village hasn’t changed all that much. After a wander around, I got back on the road and headed for home.

I had previously been asked to hold a date in my diary for another meeting with another potential client. It’s work that we’ve been discussing on and off since January, and I wasn’t convinced that it was going to happen at all and then suddenly the request for the meeting. Then silence again. I followed up towards the end of the week and still didn’t hear anything until Friday when a message came in say that yes the meeting was still on, and could I come in an hour before the meeting to discuss a contract as they do want me to do the work. So it looks like I’m going to be busy.

I have the capacity to do both these contracts as neither is full time work, but I do need to sort out the exact number of days and timescales etc. I’ll be working on that this week.

The badgers have struck again and wiped out my entire crop of sweetcorn. It’s my fault, I’d started putting up a protective fence around the plants, but with one thing and another I’d never finished it and that was enough for the badgers to get in and have a good feed. I’m not too bothered, I’m obviously disappointed to loose the crop, but I feel that this species is persecuted (both legally and illegally) enough, so I don’t begrudge them a bit of corn, because I wasn’t able to do something that would have prevented it. There’s always next year! 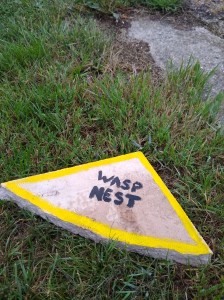 Saw this sign on one of our dog walks this week, sure enough this little improvised sign was pointing towards a fairly active wasp’s nest. Very grateful to whoever improvised this little sign.

I’ve been listening to David Hewson’s new podcast this week you should be able to find it via the podcast app of your choice or on his webpage. He talks about writing and audiobooks, and the role Venice has played in his writing in the first three episodes.

The Persuasive Power of the Wolf Lady

That’s it for this week. The upcoming few days are going to be pretty busy I think, so will probably have my head down for most of it.

Be careful out there