Another week, and another year of my life completed. Saturday was my birthday and although I mostly had a quiet day I did have cake!

This one has been pretty quiet overall, particularly when our TV set-top box died. We were able to get a work around going, but it means that we lost all of our recordings. We’ll get a replacement but it seems it’s one of those things where as the technology moves forward there is less choice. We really don’t want to be live streaming everything, some plain old fashioned technology would work. I was wondering if there’s still an old VHS machine in the loft. Maybe we could go retro. 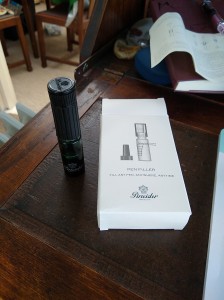 Speaking of retro, one of my favourite tools is a fountain pen. I much prefer them to write with, probably second only to a pencil. For my birthday I was given a portable inkwell. The idea of this is that you can take several refills of ink for a fountain pen with you, without having to carry a whole bottle of ink. There’s a little bit of faith involved in refilling an empty pen, as it requires you to hold the inkwell upside down with the pen you’re trying to refill inside. I’ve had one trial run so far, and the ink stayed in the pen or the inkwell and didn’t end up getting on me or my desk. I look forward to trying it when I am truly out and about. 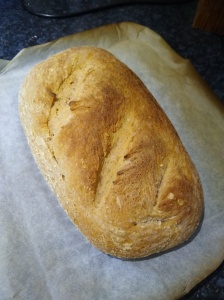 I ordered a new banetton for bread making, one that is oblong rather than round, which obviously means I get an oblong loaf.

It worked well and the loaf, and sliced bread is a much more usable shape for things like sandwiches.

The allotment is still pretty wet after a few days of rain, I’ve got a few seeds sown in the potting shed, but I’m still not ready to sow directly onto the plot. In another week or two, I’ll get the potatoes in the ground.

I was watching and listening to some of the coverage of the Space-X Crew Dragon this week. Whilst it would appear that everything went very well, there was quite a lot of discussion regarding the “commercialisation of space”. It concerns me that this appears to mean that there is going to be competition for resources in space, particularly on the Moon and Mars. Perhaps someone should be asking the question as to why we should be doing this as we have virtually destroyed earth by our own arrogance, we’re going to do the same (potentially) on the Moon and Mars too.

One thought on “TWTW # 8 Another Solar Orbit”