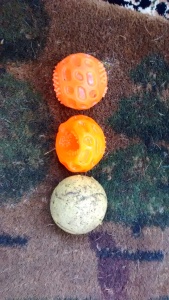 I have two ball obsessed dogs, they love to chase balls whenever we go out for a walk. To be honest it’s great exercise for them, but can occasionally be a little hard on my pocket when we loose balls in the bushes or long grass.

A few weeks ago I bought two new balls for Ruby. She’s particularly fussy about what she will and won’t play with, and so the new ones were of a particular type that she likes. Bright orange and they have a slightly unpredictable bounce, thus making the game a bit of fun.

Within the first week, I lost one of these balls in a bramble bush on one of our regular walking routes. That unpredictable bounce can be a killer when it comes to keeping track of where they end up. We looked for a quite a while, I knew it was in the bramble bush somewhere but I just couldn’t see it, nor could Ruby find it. Eventually we gave it up for lost. Sometimes you just have to accept loosing one, normally the ratio of balls lost to balls found is quite constant, but in this case I think this was about the third one I’d lost between Wilson and Ruby in a week, so my account was way in deficit.

Anyway; skip forward to this morning. We were on the same route and I had the other ball of the pair with me, as well as a different one for Wilson. Once again I threw the ball for Ruby, and it bounced and landed in the same bloody bramble bush as the last one! I thought probably we’d lost that one too, but as I looked into the brambles I could see it, although I couldn’t actually reach it from where I was standing. The bush is on a slope and I had to walk down the slope slightly, and use the ball launcher to extract the ball from within the brambles, being very careful not to scratch myself in the process.

As I was reaching in I also spotted something else – the other ball that we’d lost weeks ago. Feeling pretty chuffed with myself, thinking that we were going to retrieve not only the ball that had landed in the brambles this morning, but also the one that we’d lost in their weeks ago, I got the recent lost ball out and gave it back to Ruby.

I changed position on the slope and reached in to the brambles with the ball launcher once again. I had to stretch to reach the ball, and in doing so was leaning on an old (and somewhat rotten as I was about to find out) tree trunk.

As I managed to scoop the ball up with the launcher there was a loud crack and the tree I was leaning on gave way, I managed to get enough momentum up from the trunk of the tree, but in doing so overbalanced and fell backwards – fortunately away from the bramble bush, but I did end up on my bum in the mud. Ruby did come and check I was okay.

Apart from my pride there were no injuries – and I had the lost ball from a couple of weeks ago, so I returned to the path triumphant, or at least I tried to. My wellies however couldn’t get a grip on the muddy bank and I couldn’t get back up the slope down which I’d come. In the end I did a slight detour and rejoined the path (and my dogs who were waiting for me, they have four wheel drive and couldn’t work out why I was having such problems getting up the slope).

Taking inventory I made sure I hadn’t lost anything in my fall, e.g. phone, housekeys etc. All was well, apart from the fact that we didn’t have the ball that we’d lost that morning. I had the other one in my coat pocket, but in all the fuss of my falling over and trying to get back up the bank, we’d re-lost the ball that had gone in the bramble bush moments earlier.

I sent Ruby down to look for it, but she just ran up and down the bank and didn’t manage to find it. Resigning ourselves to finding an old lost ball but loosing another one, we carried on with our walk.

I wasn’t going to be defeated however, and as we returned I decided to have one final look for the ball. I looked down the slope, but couldn’t see it. It’s surprising sometimes how something bright orange doesn’t show up against the autumn leaf fall.

I decided one last ditch attempt was in order and sent Wilson in. “Find the ball!” I told him. He went down the bank exactly to the spot where I’d fallen, and started casting around searching. Then his tail started to wag. Soon it was going like a helicopter rotor. He was on to something. Of course this could just be something good to eat, but on the other hand I was expectant that we might find the missing ball.

Whatever he’d found it seemed to be under the tree trunk, that I had so unceremoniously managed to fell earlier, but he couldn’t quite reach it. He tried one side and then hopped over and tried the other, but whatever it was he couldn’t reach it. Eventually he tried the old commando technique of getting right down on his belly and crawling underneath, and out he came with the missing ball in his mouth!

Queue loads of praise from me, and dog biscuits for Wilson and Ruby. We went home triumphant.

So some days you loose a ball and sometimes you find one (or even one that you lost some weeks ago)!

2 thoughts on “Dog Toy Balls, Some You Find, Some You Loose. OR, How I Fell On My Bum in the Woods”