This weeks missive is a little late as I took advantage of the Bank Holiday weather i.e. overcast; to go and do some digging on the allotment. Although most of the plot has been dug over the winter, there are a couple of spots (were the overwintering veg was) that could do with turning over, as could a couple of spots where I want to direct sow some seeds.

Over the weekend I’ve also been putting in some runner beans, and sowing some more lettuce and beetroot seeds. I’m having trouble getting lettuce seeds to germinate for some reason, but I’m hoping this later sowing into properly prepared soil will do the trick. 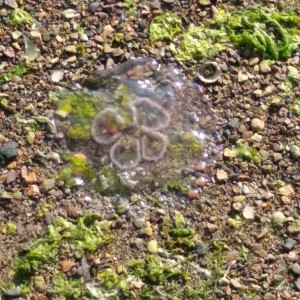 I was walking the dogs along the creek on Tuesday morning when I noticed a stranded Moon Jellyfish (Aurelia aurita) on the shoreline, it’s been a little while since I’ve seen one even though they are relatively common at this time of the year. Sadly this one had been stranded by the tide, but may have been able to last until the next rising tide as it was in a relatively sheltered spot so might not dry out.

Later that night I had the weirdest dream that the dog and I were being pursued by Portuguese Man-o-war jellyfish, who in a rather Doctor Who-esque scene had been able to rise from the sea and chase us up a cobbled street.

I’m not sure whether this was related to seeing the Moon Jellyfish that morning or the fact that I saw Avengers: Engame in that same afternoon.

So yes, finally went to see Avengers: Endgame. Nearly had my own private showing, although three other people turned up just before the last of the adverts were rolling. I know I may be one of the last people to see this, and having successfully avoided all spoilers myself to this point, I’m not going to say anything about the plot. Suffice to say I enjoyed it, thought it was a worthy addition to the MCU. If you haven’t seen it yet, I’d recommend it.

I seem to have been on Twitter for 12 years (@tontowilliams). It’s a very different place now to what it was when I first joined. I can even remember that I had to keep quiet at work that I had a twitter account, as it was in someway considered a bit subversive (I think basically my employer was paranoid that I might be tweeting bad things about them), as a public sector body they now use it to great effect, having multiple accounts to cover all the different things that they do.

I’m not sure whether I want to continue with it though. As I say, today it is a different place, and it is definitely a more angry and hate-filled place than it was in 2007. I am seriously considering taking a break from it completely while the conservative leadership contest is on. Whilst I am interested in politics, the amount of bile and vitriol that has been thrown around over Brexit and the EU elections, makes for some very unhappy reading, and I suspect the same will be true of the leadership election. Given that 100k Tory party members get to decide who the new PM of the UK will be rather than the Country as a whole, I really could care less who will eventually be chosen. From all of those who have declared an intention to stand so far, none of them are fit to lead the Country as far as I can see, so perhaps I am better just staying out of it altogether.

Do you remember when you joined Twitter? I do! #MyTwitterAnniversary pic.twitter.com/hlB5XfwKm2

I’ve been reading a few different things this week, including what is considered to be the first of the Maigret books – Peitr the Latvian – I have to say I think if I’d started here I might not have bothered reading anymore of the Maigret books. It’s not that it’s a bad story or that the style is significantly different to the others I’ve read, but it is just different. So I guess my top tip for reading this series is not to start at the first in the series.

The Seafarers: A Journey Among Birds by Stephen Rutt
My rating: 5 of 5 stars

Last week I was sent a copy of Stephen Rutt’s first book – “The Seafarers – A Journey Among Birds”, by the publishers, Elliott & Thompson.

It was an unexpected surprise and “The Seafarers” is one of those great joys of a book that is part autobiographical of the author, biographical of the birds he writes about and full of information and detail of those birds. Be they the charismatic Puffin or the extinct Great Auk the author writes a treatise on each and every bird he sees on his journey, and their homes and habitats.

Stephen Rutt has written a lyrical and delightful story, it is a book written from the heart and takes the reader to the homes of the birds where the author has been as part of his career and where he has escaped to, away from a more hectic life. He writes delightfully about each of the species he encounters, some that will be very familiar to the reader, but possibly many that won’t be and in each case he writes so that we all become familiar with each one. He makes the facts and details of those species accessible to the reader in such a way that it is easy to loose oneself in the story and picture each bird for it’s own character.

The book is also full of references and sources so that the reader can also look further for those species that capture their imagination or want to know more about – I found myself tapping in urls to look at other details of species. I know that I’ll be returning to this great book to reread the sections on those species that are close to my heart, but also as a point of wider reference to other species.

I look forward to reading the next book from this author, although I acknowledge that he has set his own bar very high.

I’m getting pretty close to completing my GoodReads reading challenge too. I think I’m only one book away from my target of 30 books

Workwise things have been quite quiet this week, waiting for things to happen elsewhere. Also it’s half-term next week, so I suspect the calm will continue. Maybe get some plants out onto the allotment if it looks like being a very quiet week.

So going out on a high note (see below) I’ll catch you next week.