Greetings from my writing desk, where this paperweight joined the other “stuff” that makes it a comfy place to work, even if it does tend towards the cluttered at times. It’s been a busy week – when is it not – I feel like I write that most weeks. I’ve been out of my office most days for one thing or another or had unexpectedly long phone calls take up more time than I’d allowed for them, but overall it’s been a good week. This coming week I expect I’ll be playing catch up a little bit, but I have less commitments out of the office, so that should work in my favour.

Nothing new on the work front this week, just pushing various projects for different clients forwards, and answering emails etc.

I’ve meant to mention that Last Exit To Nowhere still have a sale on. In my opinion their t-shirts and other clothing is pretty good. I’ve had a number of their t-shirts for getting on for 15 years and they’re still going. I bought some stuff from them earlier this month and it’s the same quality as it’s always been. You’ll need the code JAN2020 at checkout.

[I’ve not been asked or paid for this endorsement, I just like their stuff and you might too. Sale ends at the end of the month (I think).] 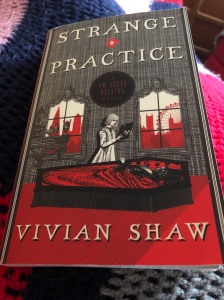 I’ve been reading Strange Practice  by Vivian Shaw, which is actually one of Ann’s books, and not something I would normally read, but it was okay and I’ll probably read the next two books that she has in the series. At the moment my tbr pile is getting very out of control and I really must enforce the “not buying any new books” rule that I’d planned to have this year, at least until the piles start to reduce some.

Not sure which of those will be up next.

I gave a garden talk this week to Hayling Island Horticultural Society, and baked courgette and red Leicester muffins for the audience for post talk discussions. I think the talk went down well as I had some nice compliments afterwards, and I know the muffins did because there were only crumbs left afterwards!

I also had a go at baking pumpkin muffins, but they didn’t go so well. Needed to be sweeter and have more spice in them, so better luck next time.

That’s about all for this week, I hope wherever you are you’re having a good one!