Synopsis
Chase Baker is not only a true Renaissance Man, he’s a man who knows how to find trouble. A part-time resident of Florence, Italy, his resume reads like a modern day Da Vinci or Casanova. Writer, private investigator, tour guide, historian, treasure hunter, adventurer, and even archaeological sandhog, Chase is also a prolific lover. Unfortunately for him, his dangerous liaisons all too often make him the target of a jealous husband. Now, at the direct request of the Florence police, he finds himself on the trail of an archaeologist by the name of Dr. Andre Manion who’s gone missing from his teaching post at the American University. But having worked for the archaeologist several years ago as a sandhog on a secret but failed dig just outside the Great Pyramids in the Giza Plateau, Chase smells a renewed opportunity to uncover what just might be the most prized archaeological treasure in the world: The mortal remains of Jesus. But how will Chase Baker go about finding both the archaeologist and the Jesus Remains? With the help of Manion’s beautiful ex-wife, Chase will manage to secure an up-close and personal examination of the Shroud of Turin, not only to view the famous image of the crucified Christ, but to unlock the relic’s greatest secret which is none other than a map, or a key, detailing the precise location of Jesus’s body. Fans of Dan Brown, Clive Cussler and JR Rain will find The Shroud Key an irresistible adventure. 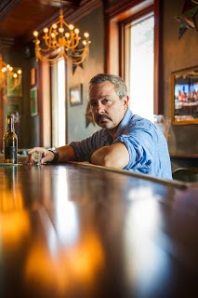 Vincent Zandri is the No. 1 International Bestselling Amazon author of THE INNOCENT, GODCHILD, THE REMAINS, MOONLIGHT FALLS, THE CONCRETE PEARL, MOONLIGHT RISES, SCREAM CATCHER, BLUE MOONLIGHT, MURDER BY MOONLIGHT, THE GUILTY, MOONLIGHT SONATA, MOONLIGHT WEEPS, FULL MOONLIGHT, THE SHROUD KEY, and more. He is also the author of the Amazon bestselling digital shorts, PATHOLOGICAL, TRUE STORIES and MOONLIGHT MAFIA. Harlan Coben has described THE INNOCENT (formerly As Catch Can) as “…gritty, fast-paced, lyrical and haunting,” while the New York Post called it “Sensational…Masterful…Brilliant!” Zandri’s list of publishers include Delacorte, Dell, StoneHouse Ink, StoneGate Ink, and Thomas & Mercer. An MFA in Writing graduate of Vermont College, Zandri’s work is translated, or soon to be translated, into many languages including the Dutch, Russian, French, Italian, and Japanese. An adventurer, foreign correspondent, and freelance photo-journalist for Living Ready, RT, Globalspec, as well as several other global news agencies and publications, Zandri lives in New York and Florence, Italy. For more go to WWW.VINCENTZANDRI.COM

Vincent Zandri has created the character of Chase Baker, who is somewhere between Robert Langdon and Indiana Jones. In doing so he has created his latest novel which is his best yet. The action moves from Florence, to the Vatican City, to the pyramids of Egypt on a search for a historic artefact that neither Langdon nor Jones could even dream about.

The Shroud Key is a page turner, as is common to Vincent Zandri’s other novels the pace is relentless. The short punchy chapters move you onwards with a feeling of breathlessness akin to the fastest action movie. The descriptions are vivid, and as the reader you feel as if you’re right there in the thick of the story. The other characters are all believable, and there is no way of telling just how the story is going to play out until the last page. The reader is kept guessing, as the plot turns, and there are surprises along the way, including a couple that I didn’t see coming.

The use of historical facts and modern situations make for a very believable tale, blending facts and the fictional story telling of the author seamlessly over the pages. This is done in such a way that you’re never quite sure whether fact stops and the imagination of the author takes over, and because the story is moving so fast, there’s never time to think about it because you’ll be too busy turning the pages to find out what happens next.

I’m expecting more of Chase Baker and could see him developing into a strong series character. If not this novel works well as a stand-alone.

I’d recommend The Shroud Key to anyone who likes fast paced thrillers, and also fans of authors such as Dan Brown, and Clive Cussler.

Disclaimer I received a complimentary copy of The Shroud Key in return for an honest review. No other form of payment has been made to me.

One thought on “Book Review: The Shroud Key by Vincent Zandri”