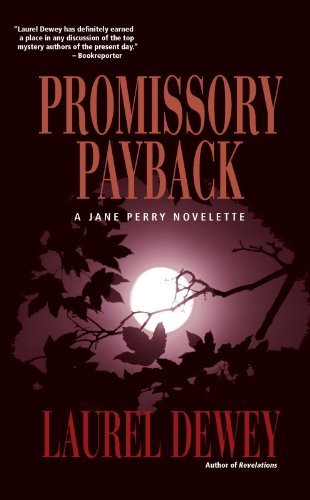 Laurel Dewey’s Detective Jane Perry is quickly becoming one of the most distinctive, dynamic, and unforgettable characters in suspense fiction today. She’s rock hard, but capable of extraordinary tenderness. She’s a brilliant cop, but she’s capable of making life-altering mistakes. She’s uncannily talented, and she’s heartbreakingly human. In PROMISSORY PAYBACK Jane is called in to investigate the gruesome murder of a woman who profited greatly from the misfortunes of others. The case leaves Jane with little question about motive…and with a seemingly endless number of suspects. 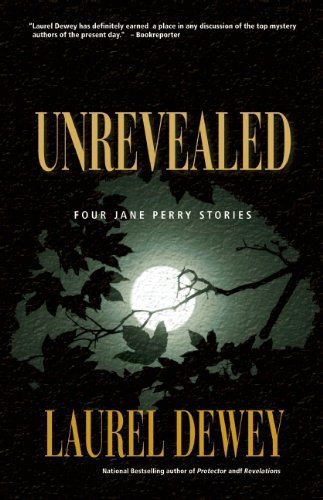 In UNREVEALED, Dewey gives us four indelible portraits of Jane Perry: ANONYMOUS: One of Jane’s first AA meetings leads her to an encounter with a woman in need of her detection skills…and a secret she never expected to uncover. YOU CAN’T JUDGE A BOOK BY ITS COVER: Forced by her boss to speak at a high school career day, Jane meets a troubled boy and finds that his story is only the beginning of a much more revealing tale. YOU’RE ONLY AS SICK AS YOUR SECRETS: An early-morning homicide call introduces Jane to a mystery as layered as it is unsuspected. THINGS AREN’T ALWAYS WHAT THEY SEEM: Jane finds herself sharing a 2:00 am conversation at a downtown bar with an old acquaintance. Will the bloody night that proceeded this moment complicate Jane’s intentions?
EXCERPT:
From PROMISSORY PAYBACK:
Detective Jane Perry took another hard drag on her cigarette. She knew she needed to quiet her nerves for what she was about to see. Another victim. Another senseless, gruesome murder that she would add to the board at Denver Headquarters. When Sergeant Weyler called her half an hour ago, she hadn’t even finished her third cup of coffee. “This one is odd, Jane,” he told her with that characteristic tone in his voice that also suggested an evil tinge behind the slaying du jour. “Be prepared,” he said before hanging up. It was a helluva way to start a Monday morning. As Jane drove her ’66 Mustang toward the crime scene in the toney section of Denver known as Cherry Creek, she tried to look on the bright side. If she’d still been a drinker, she’d be battling an epic hangover at that moment and doing her best to hide it from Weyler. But since becoming a friend of Bill W., her addictions involved healthier options such as jogging, buying way too many pounds of expensive coffee and even briefly joining a yoga group. She stopped attending the class only because the pansy-ass male instructor wasn’t comfortable with her setting her Glock in the holster to the side of her mat during class. Since she was usually headed to work after the 7 AM stretch session, Jane was obviously carrying her service weapon. She wasn’t about to leave it in her car or a locker at the facility. Nor would she be so careless as to hang it on one of the eco-friendly bamboo hooks that lined the yoga room. So for Jane, it was obvious and more than natural for the Glock to lie next to her as she attempted the Salutation to the Sun pose and arched into Downward Facing Dog. In her mind, there was no dichotomy between the peacefulness of yoga and the brain splattering capacity of her Glock. As the annoying, high-pitched flute music played in the background—a sound meant to encourage calmness but which sounded more like a dying parakeet to Jane—she felt completely safe knowing that a loaded gun was inches from her grasp. The other people in the class, however, did have a problem and they showed it by arranging their mats as far from Jane as humanly possible. None of this behavior bothered Jane until the soy milk-chugging teacher took her aside and asked her to please remove the Glock from class. Since Jane wasn’t about to take orders from a guy in a fuchsia leotard who had a penchant for crying at least twice during class, she strapped her 9mm across her organic cotton yoga t! op and quit. That’s what predictably happened whenever you shoved a square peg like Jane Perry in a round hole of people and situations that don’t understand the real world. Crime has a nasty habit of worming its way into the most unlikely places—churches, schools, sacred retreats and possibly yoga studios. The way Jane Perry looked at life, yoga might keep your flexible but a loaded gun kept you alive so you could continue being flexible. She knew what it felt like to be the victim of circumstance; to be held hostage by another person’s violent objective. Even though it was a long time ago, she’d never wash the stench from her memory. Her vow was always the same: Nobody would ever make Jane Perry a victim again. But somebody apparently had made the old lady inside the Cherry Creek house a victim. Jane rolled to the curb and parked the Mustang, sucking the last microgram of nicotine from the butt of her cigarette. Squashing it onto the street with the heel of her roughout cowboy boots, she flashed her shield to the cops standing at the periphery and ducked under the yellow crime tape that was draped between the two precision-trimmed boxwood shrubs that framed the bottom of the long, immaculate brick driveway.
AUTHOR BIO:

Laurel Dewey was born and raised in Los Angeles. She is the author of two nonfiction books on plant medicine, a Silver Spur-nominated Western novella, hundreds of articles, the Jane Perry novels, PROTECTOR, REDEMPTION, and REVELATIONS, and the Jane Perry novelette, AN UNFINISHED DEATH. She lives in Western Colorado with her husband, where she is currently working on a standalone novel.
AUTHOR SITES:
Website:  www.laureldewey.com
Facebook:https://www.facebook.com/pages/Laurel-Dewey-Author/200115782067

Jane Perry  is the no nonsense detective star of Promissory Payback.  She takes her sidearm with her to yoga (or did until the yoga teacher objected, the she quit the class).  She takes nothing at face value and takes BS from no one.

Ms Dewey had me liking Jane Perry from the outset, she’s sharp but troubled and cuts straight to the heart of solving the case; she also drives a Mustang (one of the best cars in the world, in my opinion!)

Her other characters are well drawn too, being believable both in terms of personality but also motivation, and with enough detail to make them seem real in the context of a novella, something that is not always easy to achieve.

The crime is all too believable, with the crime scene one that I found being disturbingly realistic and an essential part of the telling of the tale.  As Perry investigates and the evidence mounts the reality behind the crime is revealed.  There are both cerebral clues which Dewey’s writing ensures the readers understands as well as the obvious more physical evidence there for the reader to see.

I admit I had it worked out in my head before the final pages, which is always a little bit of a shame, sometimes a final twist or the “I didn’t see that coming” moment are nice, but in this case they didn’t detract from the telling of the story at all.

This story is a novella and works well in that format, the killing has shades of Christie and could easily have come from the pages of her mysteries as from the pen of Laurel Dewey, the crime, motivation of the criminals, and deed itself are all very believable and there is also a palpable sympathy towards the perpetrators at the end.

Unrevealed is a compilation of four short stories.  I’ll deal with each of these short stories individually, and sum up a little at the end.

Many detectives are “damaged” in some way, Jane Perry is not an exception.  She’s an alcoholic.  Her AA meeting is not the most likely place that you expect a case to come from, but that’s exactly where she gets her next case from.  A missing person, a person who was in the World Trade Centre on September 11th in 2001.

This is a great little short story, with a very simple premise, but several twists and the tale unfolds rapidly, but looses none of it’s punch in the telling.  There are several revelations, and each leads to the next until the final reveal.

You Can’t Judge a Book By Its Cover

And things are certainly not always as they seem.  There is a visceral shock factor to this tale.  What first appears to be the situation rapidly changes to reveal something much, much worse.  I was quite glad that this was only a short, as it’s an uncomfortable tale and one that shocks when you finally find out what’s going on.  Laurel Dewey manages to keep this to almost the very end of the story, and so the relatively long lead in (most of the story) means that it hits even harder at the end.

You’re Only As Sick As Your Secrets

This tale is one of misdirection and redirection and the lengths that some people will go to, to avoid telling the truth.  When a death occurs, instant suspicion falls on the deceased’s husband, but is he guilty of a crime?

Laurel Dewey uses the evidence in this story to describe the events and reveal the truth.

This third short story in this anthology is the one where the truth is perhaps more bizarre than the “crime” that has taken place, I was quite stunned by the ending and how the truth came out.  Sadly I have to say that this had a ring of reality to it that made me shake my head in a “this has to be based on a true story” way.  Whether it is or not who knows, but it was entertaining none the less.

Things Aren’t Always What They Seem

Laurel Dewey keeps you more in the dark with this final tale than any of the previous three stories.  I have to say that of the four short stories in this collection I liked this one the least.  Not because it’s not well written, because it is very well written.  Not because it’s a story badly told because it is a story very well told, hauntingly so.  It is a very believable, very horrible tale.  It puts the reader in quite an uncomfortable place, full marks to Ms Dewey for being able to achieve this.

In Summary:  Whilst I enjoyed each of the individual tales in this collection, the fact that they jumped around in terms of Jane Perry’s backstory bugged me.  In Anonymous, she’s a Private Investigator, in You Can’t Judge a Book By Its Cover, You’re Only As Sick As Your Secrets and Things Aren’t Always What They Seem she’s back in her job as a  homicide detective.  I felt like I was missing something with these stories, particularly between the first two, like a jigsaw puzzle with a piece missing, I felt that there were other tales that I needed to read to have the full picture.   This is OK though because I want to read more by this author and about this detective again.

Laurel Dewey and Jane Perry deserve a little more recognition than they perhaps currently have.  I’d never heard of either until I was asked to review them as part of this book tour.  Both Promissory Payback and Unrevealed have been too short, this is not a criticism per-se, as they work well as novella and compendium of short stories, but I would certainly like to read about Jane Perry in a full length novel.  I will be checking out more of Jane Perry’s adventures soon.

Review Disclaimer:  I received free e-book versions of Promissory Payback and Unrevealed to review as a part of this book tour.  I have received no other endorsement for this review.